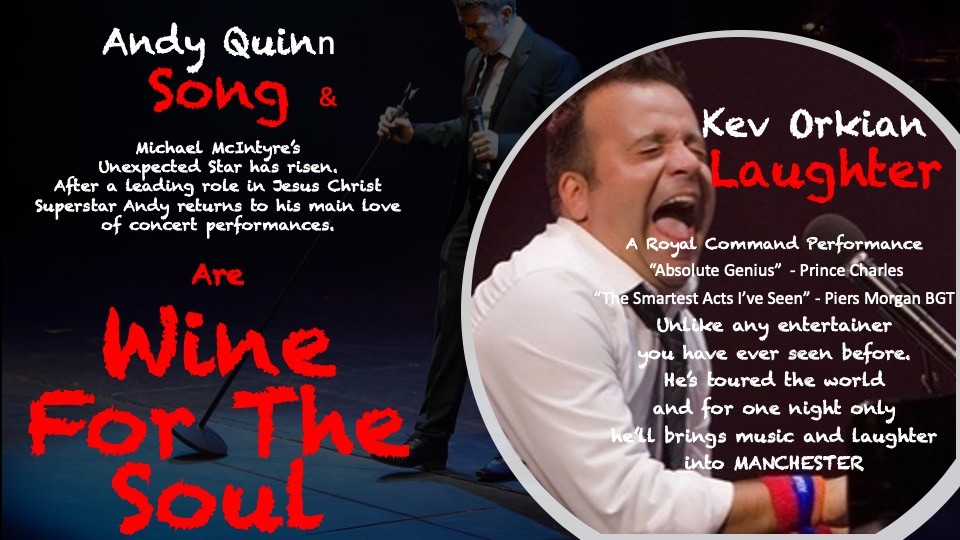 A fantastic night of great music and laughter. An amazing pianist that can make you howl with laughter , Kev Orkian ,meets up with one of Britain’s most passionate singers Andy Quinn. Together they make..... “WINE FOR THE SOUL”

A fantastic night of great music and laughter. A great pianist that can make you howl with laughter , Kev Orkian meets up with one of Britain’s most passionate singers, Andy Quinn.

“WINE FOR THE SOUL”

Kev Orkian is one of the most original comedy acts you you’ll ever see. Over the last few years he has left audiences laughing the world over.

As a classically trained pianist, he and Andy Quinn now take a “Night of song” to another level.

Relax safely and soak up the atmosphere of a what will be a massive night of laughter and song.

In the style of Victor Borge and Dudley Moore, Kev’s unique brand of music and comedy is truly unbelievable.

In London’s West End he starred in musicals such as Fame, Happy Days (based on the popular American sitcom), and even starred on Boogie Nights alongside Emmerdale’s own Hayley Tamaddon.

Having recently toured in Australia, Dubai, New York and playing to over 6,000 people in South Africa, Kev is one of the most sought-after entertainers in the world.

A talented comic and incredible pianist, Orkian is a unique talent who combines the majesty of the piano with impeccable comedic timing.

Andy became famous when he was tricked into being the ‘Unexpected Star’ on the BBC1 show by his wife, Emma, and some friends who were in on the secret. He had just an hour to rehearse Bring Him Home, from the musical Les Misérables, before performing in front of 2,500 people on the West End’s biggest stage at Drury Lane Theatre.

Andy’s appearance on the Saturday night TV show was watched by more than 6.5 million viewers in the UK and has since been aired in countries including Australia, South Africa and New Zealand. The YouTube video of the show has had over half a million hits and led to feedback from people from all over the world.

His performances as Judas in The Immersive Staging of Jesus Christ Superstar was acclaimed by critics to be one of best they had ever seen.

Since his television appearance, Andy has released his first album (‘Unexpected Star’) and continues to perform as a concert singer having played to audiences far and wide and even locally in such venues as The Royal Concert Hall in Nottingham.

Please note if postponed the date will be 4th June.

“WINE FOR THE SOUL”

(excluding all taxes and fees)